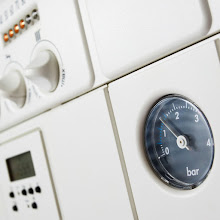 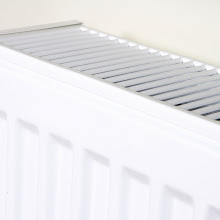 Most “Combi” boilers have a small dial indicating the circulating pressure in the radiators.

The pressure should be set to 1.5 bar (while cold).
We’d advise maintaining at this level and not allowing the pressure to drop much below 1 bar.
This should be a tenant’s responsibility.

Where a filling loop is present (often a braided hose) there are normally two filling valves (one at either end of the filling loop).
Ordinarily these should BOTH be kept closed (to prevent the system leaking and becoming over-pressurised)


If the boiler loses pressure significantly within a couple of weeks, this should be reported and may require to be checked by an engineer.

“Bleeding” is the term used for releasing air which may become trapped in a radiator.

Radiators should be periodically checked for air.
If air is present, the affected radiator(s) should be “bled” using a radiator key.
This should also be a tenant’s responsibility.
This should be done when the system is cold and properly pressurised (as above).

Boiler pressure needs to be checked before-hand and maintained during this process – then adjusted afterward – as “bleeding” will reduce the circulating pressure. If the pressure falls too low air will not be expelled – or in some cases may even be drawn in !
If significant air accumulates in a radiator, this may be evident when the top does not heat up fully and may be noticeably cooler than the lower portion.

Bleeding simply requires the “bleed valve” to be opened with a radiator key
while holding an absorbent cloth or similar underneath to catch any water which may be released when all air is expelled.

If no air is present, the valve will simply release water.

If air is present, this will be expelled (with a hissing sound).
When the valve starts to “sputter” and water starts to come out, simply close the valve.
Once the boiler has been re-pressurised, the task is complete.


You should be mindful to adjust the boiler temperature (for tap water and radiators) to allow for seasonal variation.